The Monstrous Visions of an Underground Artist 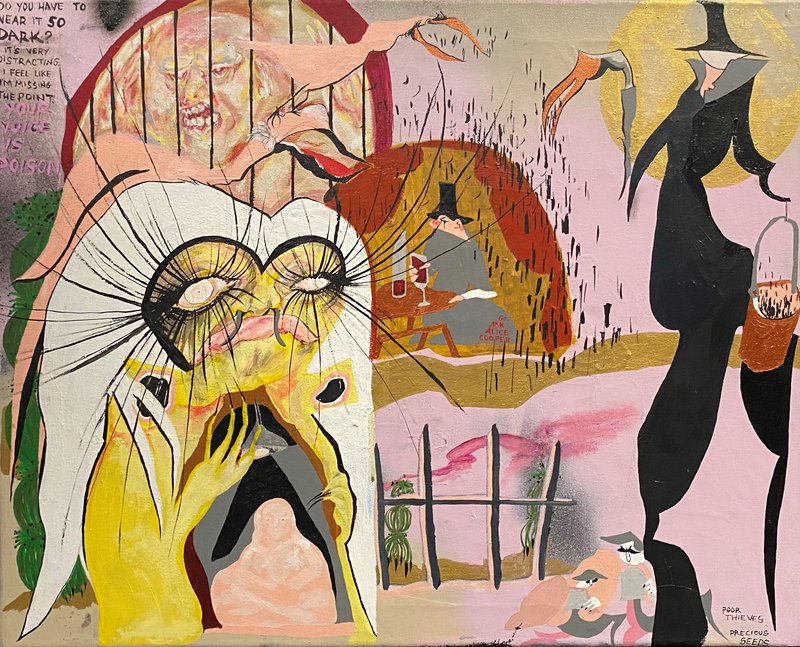 One of Hryc's "spooky things".

Strange things float in industrial backwaters. Shadowed by its perpetually cloudy skies and the larger neighboring metropolis of Toronto, the city of Hamilton, Ontario is mostly known for producing steel and giving birth to Eugene Levy, but its slightly acidic air and dystopian aura is also an ideal atmosphere for brewing odd and unnerving art.

About six years ago, the bizarre creations of Bridget Hryc began appearing like spores in the back alleys and underground music spaces of the city. Surreal and intricate, beautiful and twisted, her teeming images remind you of a chemically-induced bad dream or a maniac’s mythology. Indeed, some of the characters she paints actually began life in campfire stories she spun for friends. She explains: “When you get smoke in your eyes from the fire, you call to the dead rabbit and he makes the smoke go the other way.”

“You can also summon Pantyhead.” 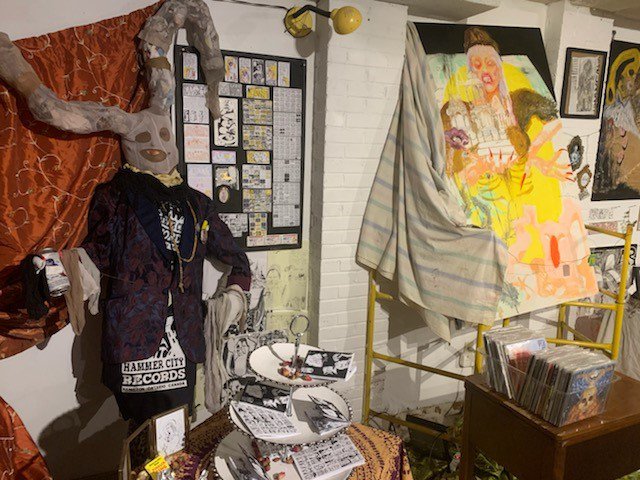 Pantyhead, whose head was fashioned from a pair of pantyhose, is the son of Lady Plague. “She’s a plague doctor and the daughter of Nostradamus,” Hryc continues. She was the main character in a graphic story the artist wrote and illustrated, “about myself as a woman who is lonely and creates a new humanoid on a table and puts her seed into him; he’s her son and her companion.”

She has also brought the characters to messy life in a short film entitled “Sauce Party,” which she describes as “a disgusting tea party of sorts.”

Hryc started drawing and making art early in school. “You know how there’s one kid in class who has to be the best at something,” she explains. “I put my chips in that basket.” She also found herself drawn to “spooky things” at a young age: “My mom was bullied and called a witch, but Halloween was the best. She made costumes and decorations and that taught me so much.” As is the case with many smart and imaginative young people, her school career was mixed. She felt lonely and created monsters as friends, started hanging out with the misfit kids, and had a bad relationship or two. “And then the rest of school slipped but making art was the only interest.” As things became harder, she yearned to make monsters to whom she could relate. She loved the classic monsters, but “I wanted to make new monsters- make them my own.” 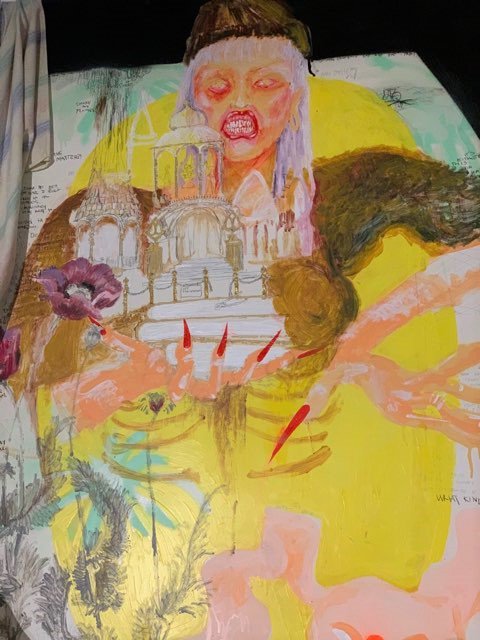 She nearly dropped out of school, but a principal who recognized Hryc’s talent got her a placement at the Center 3 Art Space. It was her first real chance to be around creative people on a regular basis and she thrived. Since then, she has been prolifically making art based on daydreams and visions she has, understanding them more only when they’re on canvas or paper. She describes these images as “airy” collages in her head and tries to get them down as quickly as possible. “They’re clues to understanding what’s going on,” she explains. 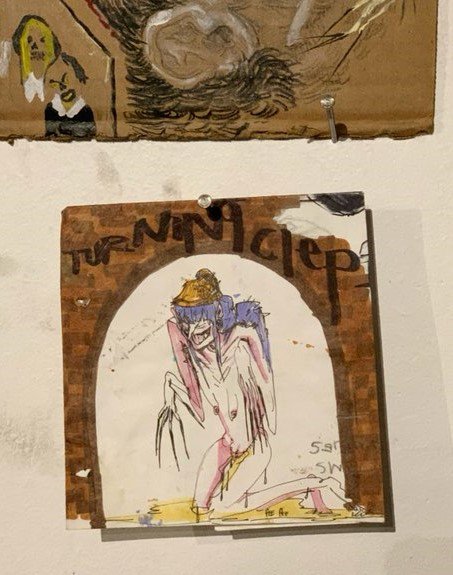 The sheer range and scale of her work is striking. When our local punk music hangout, Hammer City Records, offered Hryc a show, she arrived about an hour before its opening (while the owner sweated nervously) and filled an entire wall of the store with paintings, sculptures, flotsam, drawings, trash, and a video installation; she later performed improvised vocal compositions in the store. She has also done performance art, honed her skills at graffiti art, and made zines. She hopes to make graphic novels of her characters and would like to make books one day. Hryc is one of those artists who has a great deal of difficulty promoting her work, preferring instead to focus on making as much art as possible, so let me note here- someone really needs to give her funding ASAP.

Finding inspiration is much easier. Hryc carries a notebook with her everywhere to catch many of the ideas swimming around her brain. “I have so many ideas, but I’m working a job for the man. So, I jot notes all the time.” Working in a thrift store allows her to collect old pieces of art, books, anything that fascinates her. She saves “small things, trinkets,” the sort of lost ephemera one might find on the ground. “I’m like a crow collecting shiny things,” she notes. “I want to make a collage out of life.”

Hamilton is a place that can feel ephemeral and discarded. It also has an element of the grotesque that fuels the most interesting art. FANGORIA readers would likely appreciate her eye for things gnarled and frightening. “You see standardized ‘beauty’ everywhere,” she notes, “it’s boring!” What really attracts Hryuc is “what’s ignored: features that are unlikely, or obtuse, people’s anomalies, natural deformities, garbage… I am drawn to the discarded.” 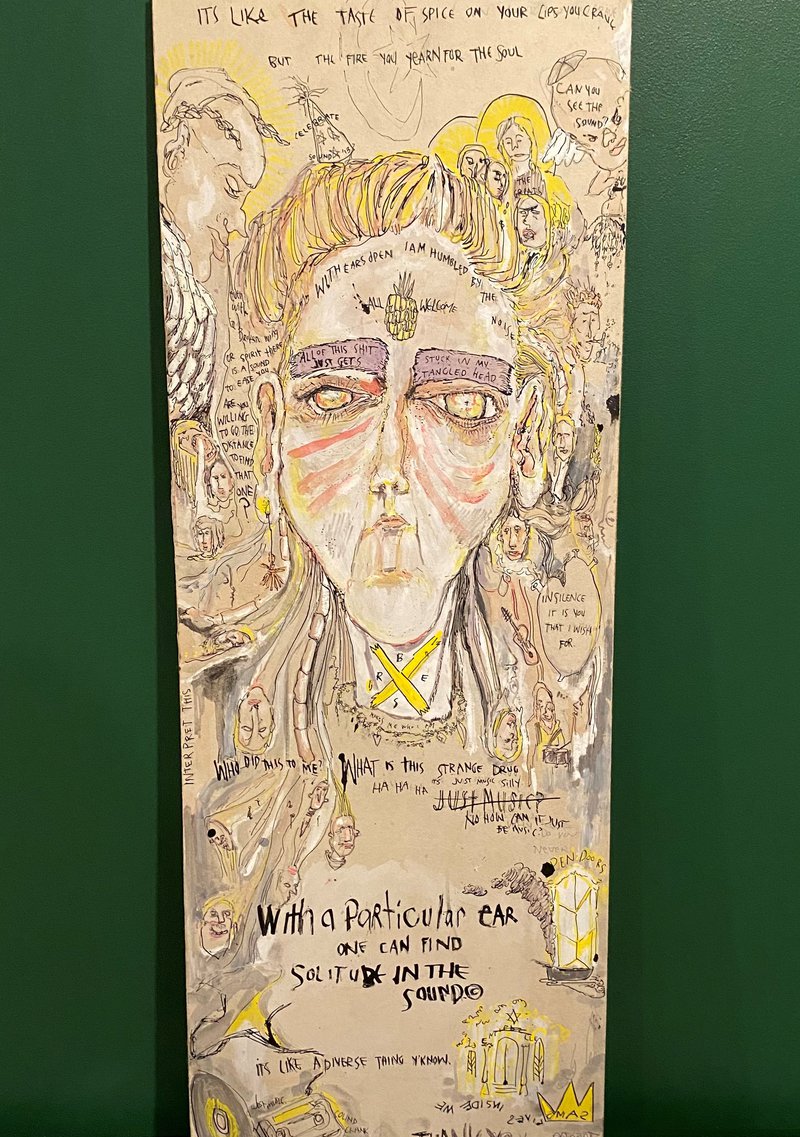