Adventures in Development Hell: A Chat with Matt Greenberg, Part 1 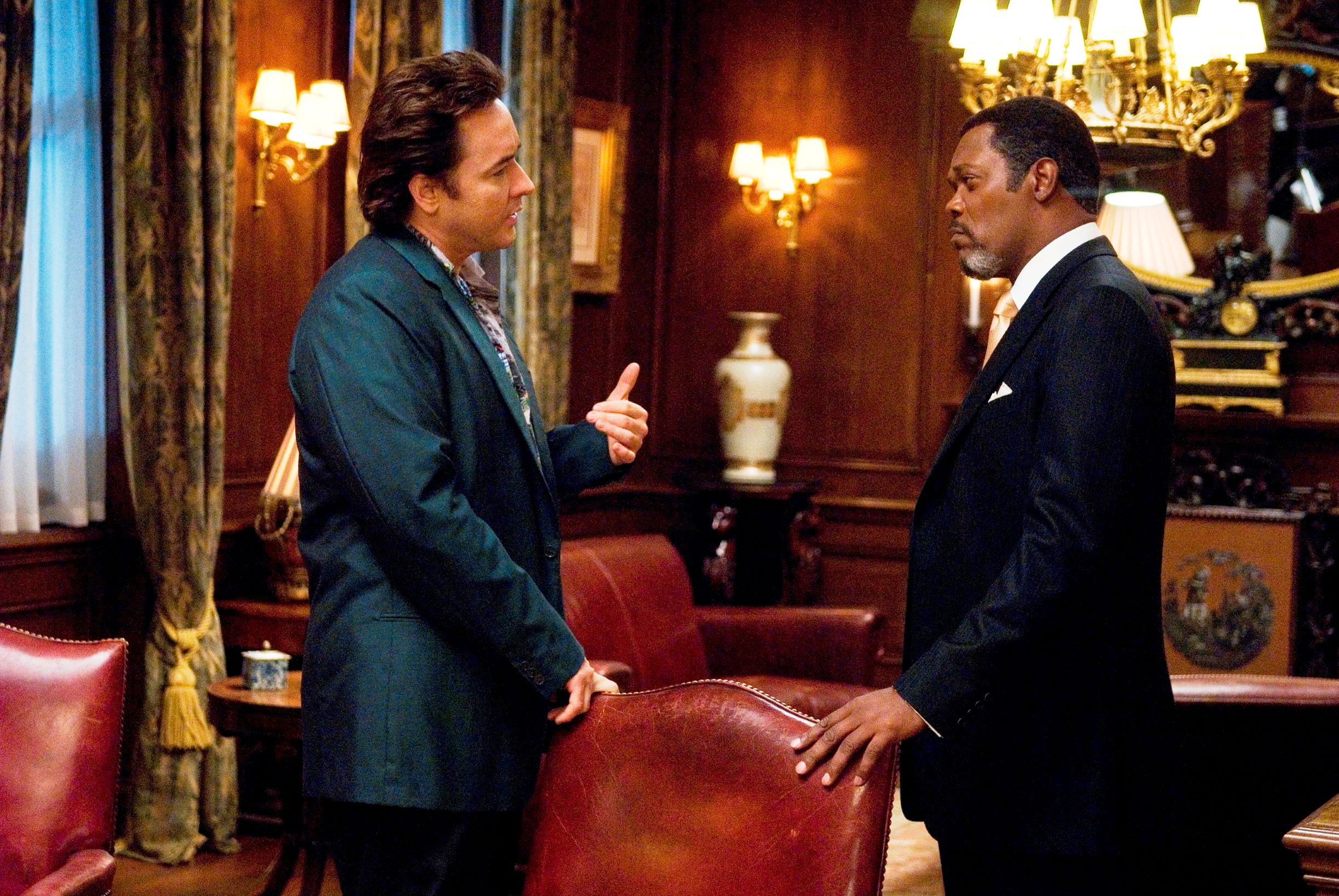 John Cusack and Samuel L. Jackson star in "1408," which was written by Matt Greenberg. (Paramount, MGM, The Weinstein Company/MovieStillsDB)

Adventures in Development Hell: A Chat with Matt Greenberg, Part 1

here’s a saying that’s been bouncing around Hollywood for decades, and it's as true today as it was when it was first spoken: Writers get no respect. We may provide the characters, and the story, conceptualize the world and put it all down on paper,  but that paper might as well be wrapped in plastic and fought over in the aisle of a COVID-era Walmart. Sure, a normal person might realize that you cannot have a movie without a script, but no one has ever accused the film world of being normal. A script doesn’t so much get treated as the blueprint for a film in Hollywood as it does get treated like something to be dropped into a cinematic crucible for agents and actors and directors and more agents to fight and squabble and bicker over, picking apart plot elements and character motivations and setting and ending until what’s left barely resembles the original form. Actors’ and directors’ egos may need to be aggressively stroked, but writers? Well, we’re not on the poster, and we’re not calling the shots on set. So while the leading man may have witty anecdotes to tell about his time on set and the director can wax philosophical on the DVD commentary about his vision, the writers… well, we have war stories.

That’s what intrigued me when a mutual acquaintance gave me the opportunity to chat with Matt Greenberg, the screenwriter behind 1408 and one of the minds behind last year’s Pet Sematary remake. A survivor of the wild west days of the 1990s independent film boom, Matt has seen and done it all -- and he’s still trucking along. From delivering pitches on the futures of entire horror film franchises to attempting to launch an entirely new horror subgenre in the United States, Matt has seen a side of the film industry rarely spoken about in laudatory interviews and witty anecdote sessions -- the hard-scrabble, Kafkaesque existence that is providing the, you know, actual plot and characters for a movie. Firmly believing that some of the most fascinating stories are those about things that didn’t or haven’t happened, we discussed his work on a number of fascinating projects that haven’t made it to the screen- and the Sisyphean reasons why.

FANGO: So, I feel like a good place to start is talking about Wong of the Dead, a horror-comedy that pays homage to Hong Kong vampire cinema that was written by our mutual friend, stuntman Jimmy Lui, and which you’ve been trying to help get off the ground. Tell us about your involvement with that.

Matt Greenberg: It’s a really interesting genre… Jimmy and I met over a project not unlike Wong. We have a mutual friend named Matthew Boroson, who wrote a book called The Girl With Ghost Eyes, which is quite a fantastic book. If you ever have a chance, check it out. It’s the first in a series. It takes place in San Francisco in the 1890s, and it’s about this daoshi [a Taoist priest] and his daughter who come to America, and they’re immigrants that fight monsters. It’s a stupendous story because it’s not just a genre story but it’s about culture clash and prejudice. I got hired to write a pilot for a series, and I had never really known any of this stuff. I knew a little bit about Hong Kong stuff, but I came in from the cold and threw myself into it. I asked Matthew, ‘Do you have any friends who can give me advice on writing fight scenes? I had never written martial arts fights before.’ He told me I should meet Jimmy and got me in touch with him because Jimmy’s worked with Sammo Hung and all these other martial arts legends. It’s interesting because Jimmy came from a film background,  but he’s also a writer, so he was able to translate what I had to do to write a good fight. He used something I thought was so smart, he said, “When you’re writing fights, there is the story of the fight, and then there’s the plot of the fight.” The plot of the fight is literally all the different moves. That’s really the choreographer’s thing. The story of the fight is what this fight really symbolizes, what it’s about. Is it two best friends coming to blows, is it about this, that and the other? And that’s what you want to write about when you’re writing a fight. That’s what will give it the emotional impact. It just opened my eyes. Then he gave me Wong of the Dead to read, and I fell in love with it. I’ve tried to get it going a couple of places. I thought this is such a unique world, this is so new, it’s a no-brainer, right? Somebody’s got to want to do this. But I’ve met with huge amounts of resistance. It was the same thing with Ghost Eyes. People weren’t ready for it.

FANGO: Before we started talking, you mentioned being involved with The Crow franchise at some point...

MG: So, you may have heard this, but years ago, Rob Zombie was supposed to write and direct The Crow 3. I know about this because originally I was supposed to write it, and Rob came on and they gave it to Rob, and then they called me up and said, ‘Hey, uhhh, can you come talk to Rob about his script?’ [Laughs] And I read it, and the problem was, it was not The Crow. It was in no way The Crow. It was its own thing. And what it was, was so wild and twisted. At the time I didn’t get it, but over the years, I’ve thought about it, and it was really kind of brilliant. It’s funny, I bring it up because you’re describing these things. It had a pretty interesting story, it had something for everybody in a weird way. The only problem was it was kind of expensive. Eventually, they let it go and they did something else, but Rob always wanted to resurrect it as its own thing. Because really, it was its own thing.

FANGO: What was your concept for Crow 3?

MG: It was a very young Crow. It was an 18-year-old boy who was executed for killing his girlfriend; he got the electric chair or the needle or something. It’s funny, that’s the only thing I can remember from it. I had a whole worked-out kind of thing. But it was going to be the youngest Crow they had done. Brandon Lee was, I think, in his mid-to-late-20s; this guy was supposed to be 17-18. I can’t remember what the age limit was on executions. They used bits and pieces of it, I let them use some general ideas, and I think they gave me some co-executive producer credit or some silly thing. I love The Crow. The original Crow to me is one of the great, crazy gothic films of all time. Unfortunately with Brandon Lee’s death, it’s got a sort of tragic quality baked in, but the tone of it is just so beautiful. So haunting.

FANGO: How did you get hooked up with that?

MG:  It was interesting, I had done a lot of work for Dimension, for Bob Weinstein, and I had also done some work for Ed Pressman. What happened was they called me up and said, ‘Do you have an idea for Crow 3?’ I said let me think about it, and I came up with an idea, and they said ‘Yeah, this could really work!’ They got really excited about it. I thought, ‘Oh, I’m gonna get to write Crow 3!’ Then they called me and said, ‘Y’know, Rob Zombie is really interested in this,’ and I knew then, ‘no,’ he’s gonna want to do his own thing. So I went away and I did something else for them. I did an extended scriptment for a remake of The 10th Victim, which was a lot of fun because I got to work with this guy David Nutter who’s a huge TV director; he does a lot of CW stuff, and he’s a really great guy and a really smart director. And then they realized Rob wasn’t going to do the movie they wanted, so they tried to get me back when I had other things going on. So it didn’t work out… You know, when they were editing Crow 2 -- this was very, very early in my career -- they had asked me to come up with dialogue. This was when they were doing reshoots. And Bob, Bob Weinstein was like ‘It’s got to be cool! It’s got to be like ‘’It’s not a good day to be a bad guy!” “Move when you’re dead, I’m dead when I move,” blah blah blah.’ [Laughs] What? So I’m trying to come up with all these great kind of things. I don’t remember what I wrote, or if anything even made it in.

But, the Miramax days, the Dimension days, were its own animal…

FANGO: How long were you there?

MG: Quite a while. On and off for about 13 years. I did a lot of stuff for them. It was weird, because back then, once you got into the ‘family,’ you were in the family until you went crazy [laughs], killed yourself or pissed them off so much they kicked you out of the family. I have a few really good ulcers from that experience. But it was a blessing in many ways because when they liked you, especially Bob, they threw everything at you. When I got involved with them -- it was actually through a friend of mine who worked there as an executive --  he pulled me aside and he said, ‘Just so you know, this is what will happen. They will love you and they will give you everything until you break. And then they will sort of push you aside until you put yourself back together and come back.’ And it was good that I knew that because I saw some severely weird productions. I worked with Guillermo del Toro on Mimic back in the day and I saw what he went through, which was crazy. I even went in on Hellraiser 4 at one point, to do rewrites. I ended up not getting the job, but it’s so interesting having that glimpse into the way things go…