A Year of Fear: The 2019 Film and TV Adaptations of Stephen King 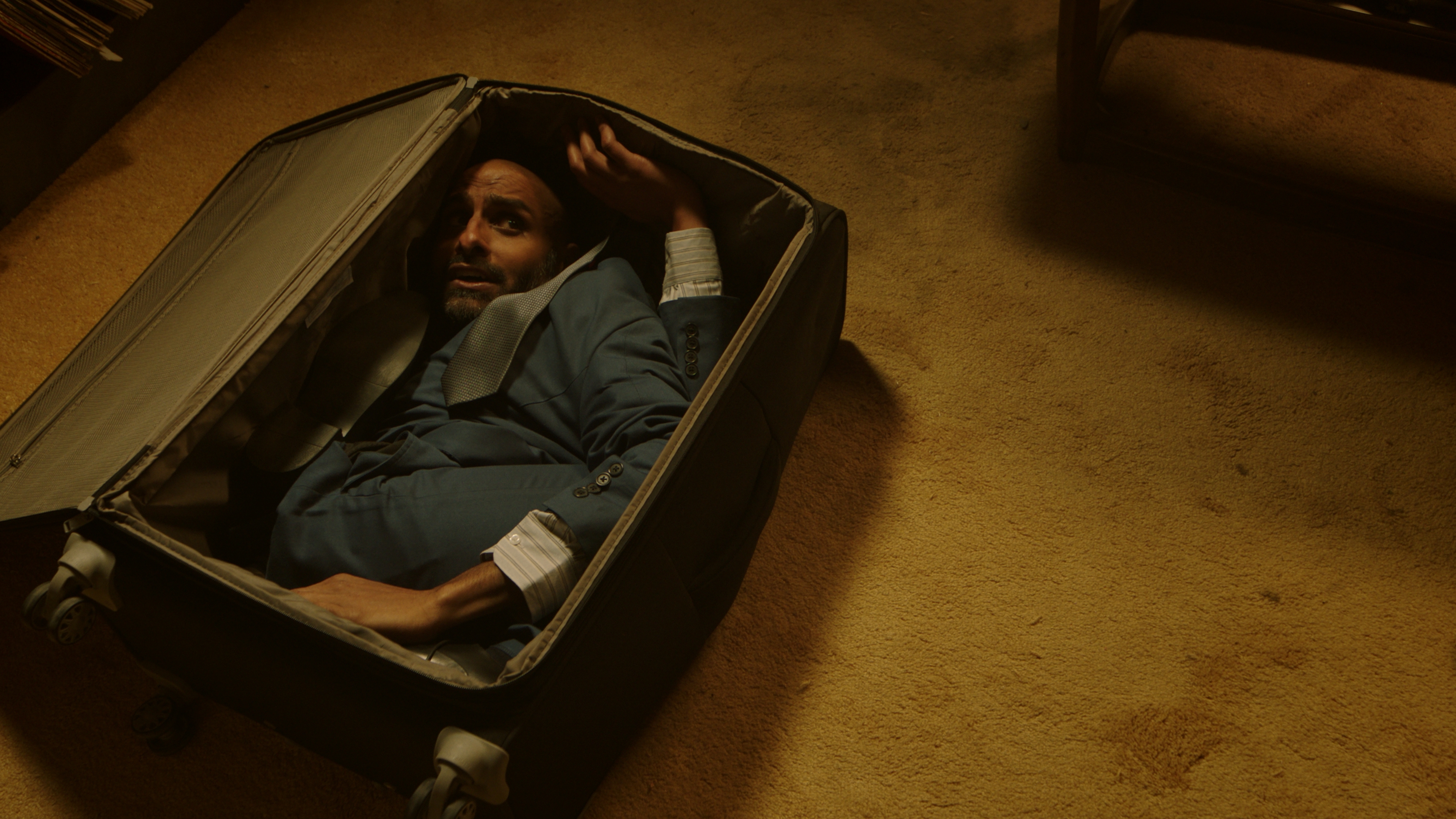 Oh, look! It's a box of Ravi Naidu. (Photo: MovieStillsDB.com)

A Year of Fear: The 2019 Film and TV Adaptations of Stephen King

ow that the calendar has rolled over from 2019 to 2020, we leave behind one of the busiest years yet for adaptations of Stephen King’s output. Films and TV shows culled from the work of the bestselling master of horror are not a new phenomenon, but since the blockbuster success of 2017’s It, producers have gone gaga over adapting King. The result has inspired a kind of Kingaissance, with more and more adaptations hitting screens big and small year after year.

In 2019, four feature films and two different King-influenced TV series arrived, with mixed results and reactions. Is the bubble about to burst? None of the adaptations in question had quite the cultural impact of 2017’s It, and that includes a star-studded sequel to that adaptation. One might look at the middling reviews of It Chapter Two, the box office disappointment of Doctor Sleep (which heads to digital this month), or the paltry buzz surrounding the second of season of Castle Rock as a sign that audiences have grown tired of this game. But King endures. He’s been a household name for more than 40 years for a reason.

The year in King kicked-off in April with Pet Sematary, a new adaptation of the author’s most disturbing novel. Pet Sematary had been adapted once before in 1989 by Mary Lambert, with a script by King himself. The 2019 film was in the hands of Kevin Kölsch and Dennis Widmyer, the filmmakers behind the nasty nightmare Starry Eyes. While the ‘89 film remained faithful to the novel while truncating much of the ever-mounting dread buried in the text, the new Pet Sematary took a big swing towards something new. The basic premise remained intact: The Creed family – father Louis, wife Rachel, children Ellie and Gage, and cat Church – moves to rural Maine only to discover there’s a cursed burial ground that can raise the dead tucked away in their backyard. But Jeff Buhler’s script makes a drastic change regarding the fates of the characters. In King’s novel, and in Lambert’s ‘89 movie, toddler Gage is run down in the road only to be resurrected as a murderous tot, but the 2019 film has the older child Ellie bite the dust and then come back evil.

Hardcore fans of the ‘89 film had some trouble with this change, but the end result pays off. The shock factor of killing off a toddler is gone, but by having the slightly older child (played by Jeté Laurence, who is quite good at being sweet and innocent and malevolently murderous), this Pet Sematary enables the undead hijinks to have a bigger impact in the story. There’s only so much you can do with a killer baby – the ‘89 film had to resort to a painfully obvious dummy at times that tipped the film into Child’s Play territory.

The new Pet Sematary went over well when it premiered at SXSW, but the eventual critical response was decidedly mixed. That didn’t deter the box-office results, which were strong, taking in $112.4 million against a $21 million budget. Still, Pet Sematary failed to have as much fanfare and success as 2017’s It, which remains the fifth-highest-grossing R-rated film of all time, and the apparent gold standard for modern-day King adaptations.

This meant that the hype for It Chapter Two was at fever-pitch by the time it arrived in early September. All the ingredients for a repeat success were there: Director Andy Muschietti was back, and not only was he bringing back the charismatic younger actors from the first film, but he had also assembled a killer cast of adults, including Jessica Chastain, Bill Hader, and James McAvoy. Once again, the adventures of Pennywise the Clown drew in a huge crowd, but the reaction overall was considerably mixed. For all of the bold, weird, wild choices Muschietti took with the new film, most of the magic was gone. Whatever spark was present in the 2017 film had somehow evaporated, replaced by over-the-top acting and clunky pacing – even though the film gets extra credit for finally resurrecting an old tradition: the awkward Stephen King cameo. But King’s role as a weirdo junk shop salesman was only a small splash in an otherwise vast, murky sea. It was perhaps the first real sign that the King bubble was on the verge of bursting. It kicked-off this new resurgence – would It Chapter Two mark the beginning of its end?

The next King movie arrived a month later, although it wasn’t destined for theaters. Netflix and Splice director Vincenzo Natali got in on the action with In the Tall Grass, an adaptation of a novella by King and son Joe Hill. The story was fast and nasty, containing a staggering bleakness that seemed almost repugnant at times (that’s not a criticism). How do you even go about adapting that? The answer, apparently, is to change as much as possible. Natali’s take on the tale is entertaining and uses the basic premise of the story: A pair of siblings get lost in a vast overgrown field that seems to defy the laws of nature. At some point, Patrick Wilson arrives and gets to ham it up big time, with delightful results. But In the Tall Grass failed to capture what made King and Hill’s story so disturbing and memorable. Since Netflix doesn’t release their real numbers, there’s no way to know how many people even bothered to watch In the Tall Grass when it hit the streaming service in October 2019. A screening at Fantastic Fest was met with a ho-hum response, and the film currently sits at 37% on Rotten Tomatoes.

The year in King movies would close out in November with the premiere of Doctor Sleep, Mike Flanagan’s adaptation of the author’s sequel to The Shining. Flanagan faced an uphill battle from the start. King’s book may be a sequel to his Shining novel, but when the movie-going public thinks of The Shining, they think of Stanley Kubrick’s film adaptation – an adaptation that took more than a few liberties with King’s text. Flanagan wanted to remain true to the Doctor Sleep book, but he also knew it was a fool’s errand to pretend one of the most heralded horror films of all time didn’t exist.

Flanagan’s solution: Cobble the two vastly different sources together. His film is a best-of-both-worlds scenario – a story that’s both rigidly faithful to King’s Doctor Sleep novel while also throwing in a plethora of references to Kubrick’s Shining film. It works – kind of. In telling the story of the adult Danny Torrance (Ewan McGregor), Doctor Sleep fares better when it’s forging its own path – particularly when it focuses on the villainous Rose the Hat, a psychic vampire who preys on kids with the Shining, played with menacing glee by Rebecca Ferguson. Whenever Flanagan feels the need to throw in Kubrick moments – the last act of the film finds the filmmaker recreating many of Kubrick’s iconic shots – Doctor Sleep stumbles.

But Doctor Sleep is also one of the better recent King adaptations because it understands what makes King tick. For all of his tales of terror, the master of horror is really a big softie – a guy who believes in redemption, and hope, and light defeating the dark.

But the audience just wasn’t there. Compared to the box-office returns of Pet Sematary and It Chapter Two, Doctor Sleep was a disappointment, taking in $71 million worldwide against a reported $55 million budget. The world, perhaps, was not ready to shine again. However, this hasn’t dissuaded Warner Bros. from going ahead with a new director’s cut, making Flanagan’s already lengthy film a hefty three hours. It arrives on digital this month, Blu-ray in February.

On smaller screens, two different King-influenced TV shows arrived in 2019. The first was Creepshow, a new original from Shudder that sought to recreate the EC Comics mayhem of King and George A. Romero’s brightly colored anthology film. Appropriately enough, the first episode of the series was a King adaptation – a tale based on his short story “Gray Matter,” in which cans of beer mutate a drunkard father into a slimy sludge monster. It’s not one of King’s better yarns, but the garish, cornball premise makes it perfect for the hokey, entertaining world of Creepshow.

In October, Hulu debuted season 2 of Castle Rock, an anthology series set in King’s world, using one of his most frequent fictional locations as a backdrop. The first season was a mixed bag, loaded with plenty of Easter eggs but lacking in cohesion and coherency. Season 2 was a large improvement, combining King’s novels ‘Salem’s Lot and Misery – two stories that don’t seem like they’d go together very well, but do. Crazy nurse Annie Wilkes (Lizzy Caplan, doing her best Kathy Bates impression), blows into town with her daughter (Elsie Fisher) in tow and promptly gets mixed up in a story involving an undead cult. It was a bigger, broader, and far more emotional season than the first – but did anyone notice? In the world of streaming TV, where there’s just too much stuff to deal with, season 2 of Castle Rock appeared to make nary a blip on the radar. Hulu has yet to announce if it’s even coming back for a third season.

If there’s a trend here, it’s that King adaptations aren’t nearly as popular as producers might hope. The wild success of It might be more of an exception these days rather than a rule. But the wheel continues to move forward. This month sees the premiere of The Outsider, a new HBO series based on King’s novel of the same name. New feature film takes on The Tommyknockers, ‘Salem’s Lot, and The Dark Half are in the works, as well as adaptations of From a Buick 8, Road Work, The Girl Who Loved Tom Gordon, and The Long Walk, while TV adaptations of The Stand, Lisey's Story, The Dark Tower, and The Eyes of the Dragon are all in various stages of production and development. Hell, there’s even a stage production of The Shining that might end up on Broadway.

And through it all, King keeps plugging away. He’s probably written four more books in the time it’s taken me to hammer out this piece. As long as King keeps writing, film and TV adaptations will come calling. The bubble may burst, but it’ll always form again. As King wrote himself in Revival (another book that’s had a potential adaptation mentioned), “Life is a wheel, and it always comes back around to where it started.”

Chris Evangelista is a staff writer and film critic for Slashfilm.com. His work has appeared at Mashable, Nerdist, RogerEbert.com, Empire Magazine, Birth.Movies.Death., and more.