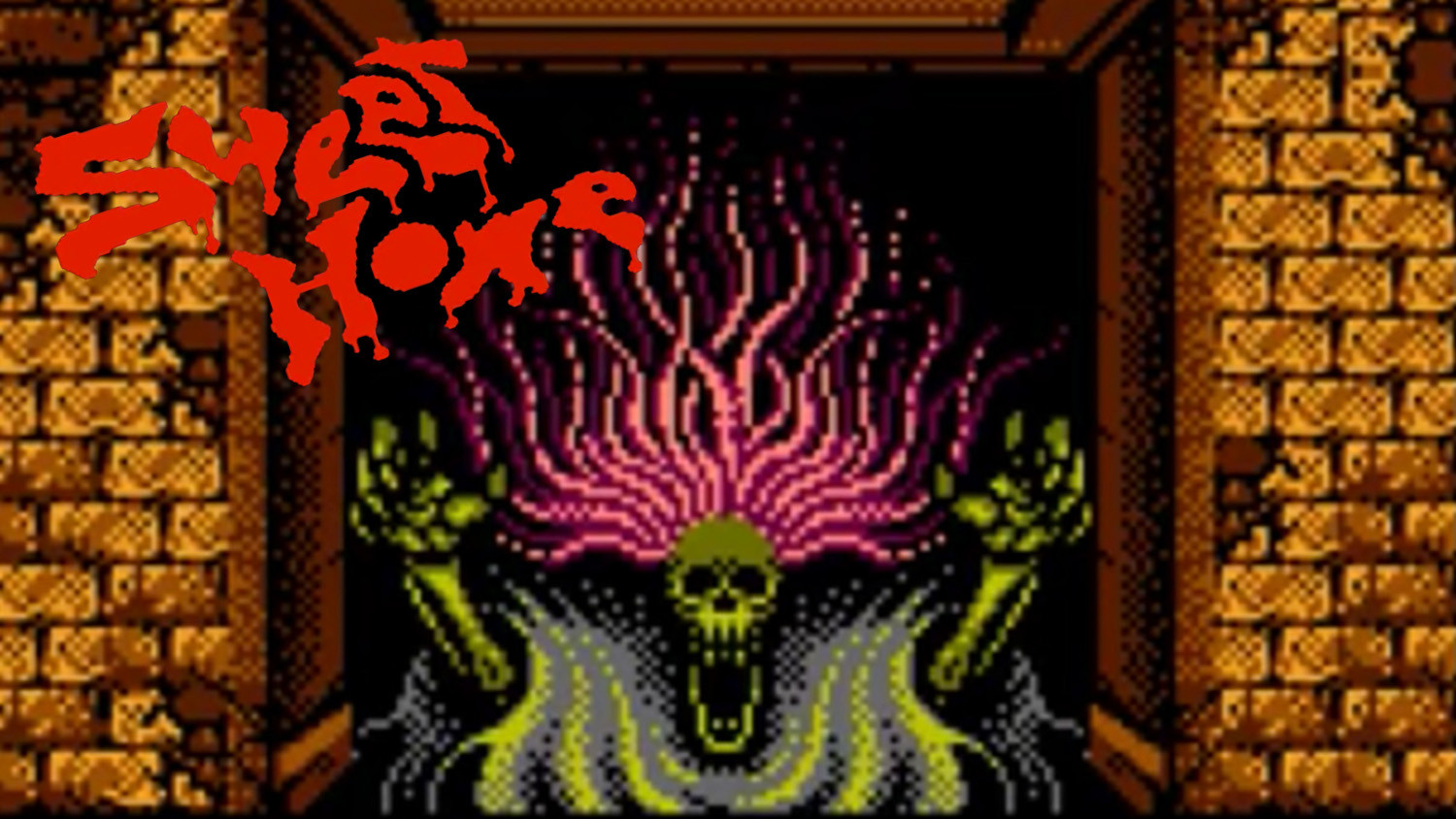 The movie poster for "Sweet Home" says it all. (Photo: IMdb.com)

ecently, I looked back at the NES game Monster Party in the context of 8-bit horror games, and how the developers attempted to work around the restrictions of the system to bring players a satisfying experience. Today, I’d like to look at another game with just as interesting a genesis, an even better execution, and a far more powerful legacy: Sweet Home.

If you’ve had the fortune to read Issue 1, Volume 2, of the new run of FANGORIA, you’ve already gotten somewhat of a primer on Sweet Home’s backstory. For the uninitiated: Sweet Home was something of an internet mystery for several years. See, the title properly belongs to two separate yet intertwined properties, the game itself and a 1989 movie of the same name with the exact same premise: A news crew enters a purportedly haunted mansion that once belonged to famed fresco painter Ichirō Mamiya (loosely based on Francisco Goya), who died a recluse and is said to have left his final, undiscovered work on the walls of his own home. Upon entering the house, the crew learns that there is indeed a ghost, although it’s not Ichirō, and discover that they’ll have to determine the true nature of the haunting if they want to survive the night.

The game and movie were released almost simultaneously, and conflicting information coming out of the projects’ native Japan alternately listed the film as being based on the game, and the game being a licensed adaptation of the film. There was solid evidence backing up each argument. On the one hand, the film is a very different beast from most Japanese horror movies. With its subplot about single dad Kazuo learning to be a better father and falling in love with pretty producer Akiko, an impressive ghost puppet, and a relatively upbeat ending, it’s the closest thing we’ll ever get to Steven Spielberg directing a J-horror, making it conducive to a video-game adaptation. On the other hand, the game is solid, and considering that 99.9% of licensed games are absolute garbage, it was a reasonable belief that the game was the original product, which could possibly account for the movie’s tonal dissonance.

It was to a lot of folks’ collective surprise, then, when it turned out the game was in fact a licensed product, released to help promote the film by tying it to the then-burgeoning Famicon (the NES’s name in Japan) market. How had such a thing occurred? Video games based on films were supposed to be clunky, hastily put-together, soulless cash-ins.  Sweet Home was … good. What happened?

As it turns out, the development of the game version of  Sweet Home wasn’t some soullessly outsourced project rushed into production as a marketing afterthought. Rather, the game’s creation was supervised by the film’s director, Kiyoshi Kurosawa (who’d later go on to make the seminal J-horror film Kairo); and the man responsible for heading up the project was Tokuro Fujiwara, a game designer with such legendary titles as Mega Man and Ghosts ‘n Goblins under his belt. Between a skilled director dedicated to preserving his vision and the man responsible for some of the greatest NES titles of all time, it only made sense that Sweet Home would turn out to be enjoyable.

So, what makes Sweet Home good? For one, the graphics are remarkable considering the limitations of the Famicon, often coming close to approaching some of the more primitive SNES games that’d come out in that console’s early years. Far from the pixelated sprites of, say, the original Mario, the characters more closely resemble the little guys from one of the better pre-Playstation Final Fantasy games. Meanwhile, the cut scenes and enemies — though not completely animated — are complexly drawn and lovingly conceptualized, from the simplicity of a spooky evil doll to the scimitar-wielding zombie of a burn victim. Not content to rest on visual beauty, though, Sweet Home also has unique and enjoyable gameplay. It’s something of a cross between the aforementioned Final Fantasy series and Maniac Mansion: You control five characters, each with a different skill set, navigating them through the house and uncovering clues about Ichirō’s past while discovering the hidden frescoes. Running into an enemy switches the game from exploration mode to turn-based combat, in which the player must use the weapons and tools at his or her disposal while keeping the party alive. If someone is too badly wounded, they die in gruesomely rendered cut scenes, with no way to bring them back. Depending on how many people are still alive at the end of the game, there are multiple different endings, adding to the replay value and encouraging player experimentation and exploration. It all adds up not just to a solid gaming experience, but — with the creepy music, nasty deaths, limited resources, and gnarly monsters — a fine horror gaming experience to boot, even if most modern survival horror vets would find it quaint at best. Indeed, along with Project Firestart, Sweet Home properly deserves credit as one of the progenitors of the survival horror genre as we know it: Inspired by his experience on the game but disappointed with what he viewed as the NES’ technical limitations, Fujiwara set out in the 1990s to remake the game for the Sony Playstation, only to find himself dropping more and more zombies into that game. Thus, Mamiya Manor became Spencer Mansion, the title became Resident Evil, and the rest is gaming history. (The series’ title is even a nod to Sweet Home, in which the Mamiya house is referred to as a “place of residing evil.”)

For a game so enjoyable — and influential — it’s a shame that American audiences never got a legitimate opportunity to play it. Like I said above, there’s little to nothing in here to scare most contemporary survival horror players, who came of age on Res Evil and Silent Hill. The gaming world had never seen anything like this in 1989, though, and the rampant mutilations, bloodshed, and burnings in the game’s cut scenes -- not to mention the ultimate revelation about the ghost’s motivation and identity -- were enough to make Nintendo of America’s censors give one big “hell no.” Thus, the game lived and died in Japan, with Western audiences really only learning about it after the internet made information on non-US gaming history more readily available. It’s a testament to the game’s enjoyability — not to mention influence — that, despite the confusion and obscurity, we’re talking about it today.