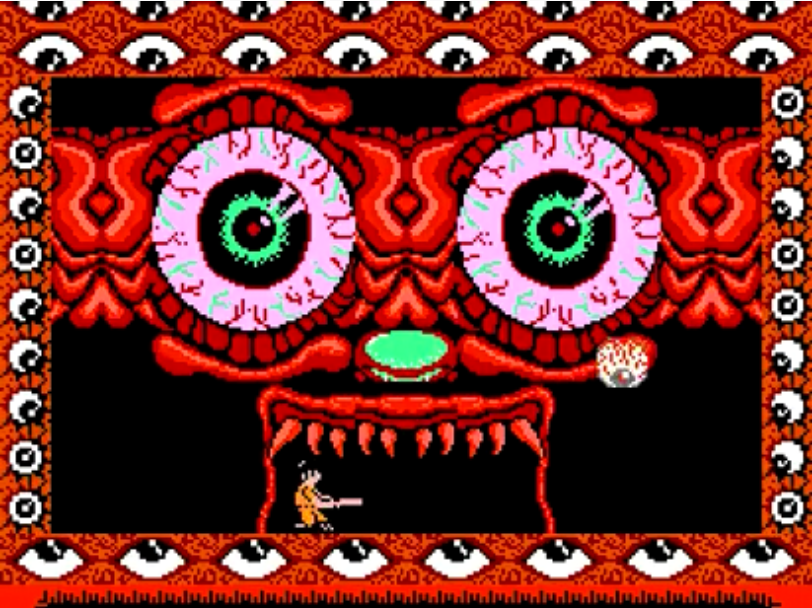 urvival horror has come a long way. With the advances made in CGI, storytelling, and VR set to revolutionize gaming, plays now have the opportunity for a fully immersive horror experience that puts them in the world of the game. With games such as Resident Evil: Biohazard, Friday the 13th, and the upcoming Allison Road, it’s strange to think that we once considered the original Resident Evil the pinnacle of a terrifying gaming experience. Looking back on games of that era, though, it’s amazing how scary they really were. Despite its chunky polygon graphics and sometimes stilted voice acting, the original Silent Hill is still one of the most frightening video game experiences ever programmed. Looking back even further than the PS1 era … well, things were interesting.

It’s understandable that early game programmers and companies would want to connect with the horror crowd. There has always tended to be somewhat of a crossover between horror fans and gamers, and the experience of watching a horror movie lends itself well to an interactive element — we’ve all imagined fighting the monster and coming out on top. The graphics and technology of the late ‘80s and early ‘90s weren’t exactly conducive to that fully immersive experience, though. Jumping off of platforms and stomping Koopa Troopas as Mario was exciting because the player was engaged in a fast-paced, difficult activity, not because they felt like they were in imminent danger from a lurking threat. And while really getting into a game and feeling an intense need to beat it/escape an enemy/complete a level can happen regardless of graphics, it’s more difficult to create a horror atmosphere or ambiance with a limited color palette and pixelated sprites. That’s what makes NES horror games so interesting —since the company itself tended to shy away from “adult” projects, it was left to disparate developers to try their own hands at ways to make an 8-bit game legitimately scary. I’d like to look back on one of those noble experiments, and my own personal introduction to survival horror gaming: Monster Party.

We got our Nintendo in 1989, three years into its North American run, after the price finally went down and my dad decided it was time for him to upgrade his Atari. As was probably the case with many gamers of a certain generation, though, it wasn’t long before his toy became mine, and I was the one spending more time plunked on the floor in front of the television. We both shared an enjoyment of platformers, so, I found myself in the enviable position of being a four-year-old with real input on buying decisions. That was how we ended up with Mario 2, Fester’s Quest (oy, gevalt), and Monster Party. Admittedly, the last was wholly my choice, and based on a 4-year-old’s facile understanding of advertising. The game box depicted a slew of movie monsters leering at the viewer, chief among them Medusa. I was in the middle of a hardcore obsession with the Desmond Davis Clash of the Titans, specifically Ray Harryhausen’s Medusa. From my perspective, this was a game where you got to fight the monster from the movie. Dad thought it sounded fun, and, I went home to do battle with the snake lady herself.

Neither of us had any idea what we were in for.

Released in 1989 by Bandai/Nintendo, Monster Party is unique for a number of reasons. It was a horror platformer; it was an officially licensed Nintendo game despite the surprising amount of blood and occasional swearing; and it was completely bonkers. The player takes on the role of Mark, a Little League baseball player who’s approached one night by an alien named Bert, who looks like a tiny, bipedal dragon. Bert explains that his world has been taken over by monsters, and he needs help. Bert’s apparently none too bright, because he decides that Mark’s ability to swing a bat makes him the best candidate to lend him a hand, and the pair set off to liberate Bert’s home world.

Originally conceived of as Parody World: Monster Party, the game was meant to let gamers fight famous horror icons from Jason Voorhees to The Thing across multiple levels, from a sewer system to a haunted house. Copyright laws are apparently a little faster and looser in Japan, though, and when the game was exported to the States, Nintendo wisely recognized that it represented a potential lawsuit from every movie studio in the country. Their solution was to get … creative. So, instead of Stripe from Gremlins, players got to fight … a giant cat. And instead of a gorilla soldier from Planet of the Apes, you do battle with … a guy wearing a Jack-o-Lantern on his head. Even my beloved Medusa was decidedly off-brand, taking the form of a giant snake with a woman’s head … and snake hair. (Keep in mind you’re playing as a kid who’s beating all these things to death with a baseball bat.) While some of the bosses still make sense (a mummy, the Grim Reaper), a large share of them are just plain weird —at one point, you have to kill a giant punk rocker.

Monster Party also has the distinction of being one of the few 8-bit games to be genuinely disturbing, albeit only in small doses. Even though this was among the first games I got for the NES, it was one of the last I actually sat down and played. Why?

The first level has the ominous name “Entrance to the Dark World”; in the Japanese version, it’s a spooky looking mountain range at sunset. Nintendo apparently thought that was too much, though, because we Americans got a generic, candy-colored background that doesn’t really look like anything and gives players no indication of what they’re in for. So, your introduction to the game —and by “your” I mean 4-year-old me and the rest of the kids who had no idea what they were in for — is running around whacking monsters with a baseball bat in this Willy Wonka-looking playland while chipper MIDI music drones on the soundtrack. Good, clean, non-scary fun.

And then you get to the midpoint of the level.

Japanese players would recognize the big green thing you have to pass as a Haniwa statue — a funerary item buried with the dead in ancient Japan — and know that something was up. To me, it looked like a happy tree, so I had no clue something was about to go down. Then, you pass the Haniwa statue. Then, lightning strikes. Then, blood starts pouring out of everything, the Haniwa/happy tree melts into an abomination looking like a ripped-up face, and the music turns into a funeral dirge.

Apparently, I wasn’t alone in nearly pissing my pants and shutting off the game.

Funnily enough, as I discovered when I finally revisited the game years later, that’s just about the only scary moment. The rest of it is much sillier and more adventure-themed, and even when it tries to be frightening it betrays its graphical limitations. Still, there are a few subtle, scary touches that show the creators were at least trying — the inexplicable presence of what appears to be an internment camp guard tower during a zombie fight is quietly unsettling, and to this day, I still have no idea what the programmers were going for with that. Further buttressing the game’s legit horror credit is the frankly shocking amount of blood and gore that shows up, especially for a game that came out at the height of NES’ extreme censorship policies. The company infamously forced the team behind porting Maniac Mansion to remove a Renaissance-style statue from an art gallery because of imaginary pubic hair, but, inexplicably, they had no issue with any of the stuff in Monster Party. This is a game where the password screen depicts skeletons sinking into a pool of blood and a boss (the Grim Reaper, no less) greets the player with “Welcome! Entrance to Hell.” The ending, too — which includes the image of a screaming little boy melting into goo before the revelation that he’s become trapped in a Groundhog Day-style time loop — is especially dire for a Nintendo game and gave many an early-‘90s kid their first experience with uncanniness.

Monster Party isn’t a title that holds up value in actual play. The mechanics are clunky, it tends to get repetitive, and it vacillates between being too easy and verging on “Nintendo hard.” It’s still fascinating as an artifact, though, and as an experience. For the sheer strangeness of it all, it’s worth checking out —both as a reminder of how far we’ve come in horror gameplay, and what can happen even under the most limited circumstances when great imaginations set their minds to creating something truly unique.