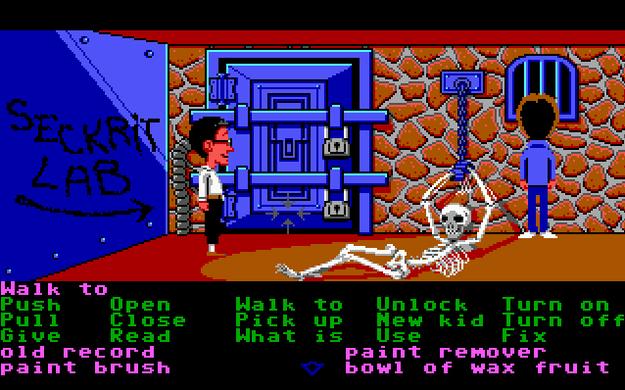 n my previous 8-Bit Terror articles, I’ve talked about the limitations presented to the earliest horror game programmers, and how they attempted to work around those technological and graphical impediments to deliver something that’s key to the survival horror genre: immersion. Part of the draw, after all, is the vicarious experience of actually being in a horror movie, and if the movie you’re supposed to be a part of is green blobs flashing on a grey background, it’s difficult to feel as if there’s any real threat. While other programmers succeeded either by retooling the horror experience to work within those limitations, like Bandai emphasizing platforming action with Monster Party, or using a role-playing game format to emphasize story as in Sweet Home, the folks at the dearly departed LucasArts took a unique approach to their stab at survival horror by going after the spirit, if not the letter. More than any other game of the 8-bit era, Maniac Mansion — despite having some of the more primitive graphics among its brethren — replicates the feeling of a horror movie.

Maniac Mansion has the distinction of being released before many of the other games I’ve referenced in this series, debuting in 1987 to the Commodore 64, rather than the NES, to which it wouldn’t be ported until a year later. Like Sweet Home, its gameplay is more open-world than linear. Players take control of Dave, a nondescript high-school boy whose girlfriend, Sandy, has been kidnapped by Dr. Fred Edison, owner of the titular mansion and a mad scientist obsessed with removing teenagers’ brains for apparently cannibalistic purposes. The player must also choose two additional companions for Dave, picking from among a crop of teenagers with various skills and abilities, from musicians Razor and Syd to techno-geek Bernard to photographer Michael. The entire game takes place within the titular abode, with players having to explore various rooms and the mansion grounds looking for ways to bypass obstacles (such as the guard tentacles), access restricted areas, and ultimately break into the basement laboratory to free Sandy. Depending on which teens you’ve chosen, different challenges and solutions present themselves, and there are multiple different ways to beat the game. Michael, for example, can use his photography skills to develop blueprints needed for Fred’s son — a survivalist man-child named Weird Ed — to break into the lab, while Bernard can fix a shortwave radio needed to contact the police (in a subtle nod to the genericism of most horror heroes, Dave is the only member of the party who’s completely useless). Conversely, there are also different perils in the mansion, and there are almost just as many ways to die as there are to beat the game. Whatever you do, don’t mess with Weird Ed’s hamster.

Maniac Mansion is patently not a frightening game. There are no jump scares, no lurking dread, no sense of the uncanny. What Maniac Mansion lacks in the fear of a horror game, though, it makes up for in delivering all the trappings of a horror movie. It is, essentially, one great big easter egg, the product of Ron Gilbert and Gary Winnick’s love of 1950s B-horror and ‘70s-‘80s teen slasher flicks. From the bloody chainsaw in the kitchen to the evil, sentient meteor in the basement and the William Castle-esque skeleton chained up in Fred’s makeshift “dungeon” (i.e. his utility room), the game is jam-packed with shout-outs to myriad horror films, all presented in the style of a horror film. Indeed, Gilbert and Winnick innovated the cut scene expressly for this game to add to its cinematic quality. It’s all woven together in subtle- and clever-enough a manner that playing the game isn’t just clicking through a series of pop-culture references as if it were some sort of 8-bit equivalent of a Friedberg and Seltzer flick. Instead, the programmers focused foremost on producing a solid game built around a clever homage to the horror media they loved, and then dropping in further references and nods when appropriate. Dr. Fred is a villain straight out of a ‘50s atomic scare movie, while the varied cast of hapless teens would fit comfortably in any of the Nightmare on Elm Street or Friday the 13th films.

Maniac Mansion is usually assessed in the context of the impact it had on adventure games, and rightfully so. At a time when text games dominated the non-platform market, it showed players how innovative, immersive, and visually creative a video game could be, while the invention of the cut scene has had a ripple effect that’s lasted all the way up to the modern era. What’s not usually looked at, though, is its legacy in the survival horror genre. Granted, with its overall tone of tongue-in-cheek parody, it’d be difficult to make an air-tight case for it as the granddaddy of survival horror — that distinction properly belongs to Sweet Home and/or Project Firestart, depending on how (or if) you want to split hairs. Nonetheless, many of the trappings of later survival horror games are here: limited resources; an emphasis on puzzle-solving over combat; sudden, unexpected threats; and the enemies having the home-turf advantage. The NES port even introduces the common survival horror leitmotif of the soundtrack abruptly switching to spooky music to signify the coming of a threat. In reconceptualizing the graphics of the game, Jaleco also gifted it one of the best soundtracks of the Nintendo era, including a Theremin-inspired theme for the Edison family that plays during their cut scenes or whenever the player is in immediate danger. Hopefully, as the history of pop culture is reassessed and deconstructed, Maniac Mansion will add another notch to its already heavily perforated belt and be recognized as one of the pioneers of the survival horror genre.