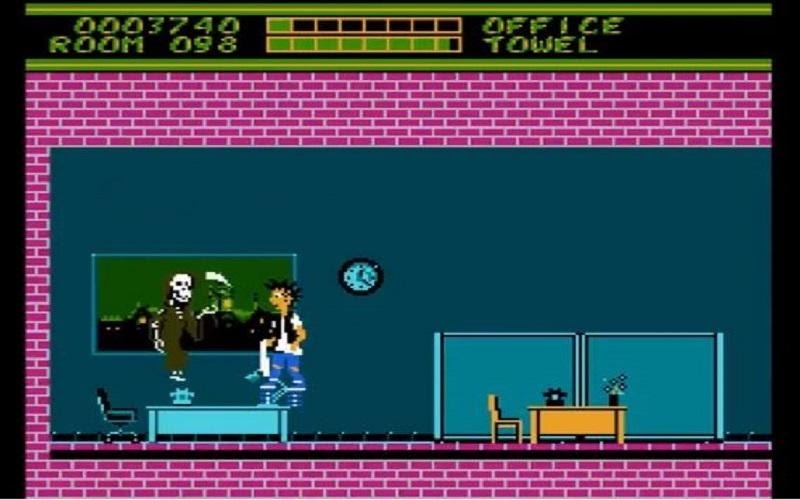 mong the various subgenres of horror games, Metroidvania is perhaps one of the least known and, especially in an age when the emphasis is on either free-roam survival or first-person shooter, least utilized. Those who came of age in the late ‘80s or ‘90s know what I’m talking about, even if you didn’t necessarily know the name (hell, I just learned within the past year there was a proper term for it). As the name suggests, the Metroidvania game is a fusion of elements found in Metroid and Castlevania. The emphasis is on platformer action, but within a free-range, free-exploration environment; rather than progress through a series of levels in a predetermined order, with the complexity and difficulty increasing along the way, players can roam a given environment, obtaining weapons, items and clues to help them overcome a variety of challenges en route to a final battle. It’s a unique execution for a horror game, one that allows for a deft fusion of survival-horror tension, skills-based platformer fun and run-and-gun action. While the conventions of the Metroidvania subgenre are generally considered to have been codified by 1997’s Castlevania: Symphony of the Night, elements of the style were appearing as early as the second title in the Castlevania franchise, and combative or contrarian gamers could even offer a solid argument that there’s some inspiration to be found in Zelda II: The Adventure of Link. Often neglected during discussions of the subgenre, though, is a largely forgotten, also-ran title that debuted during the dying days of the NES to a largely underwhelming reception, yet which beat Symphony to the punch by half a decade: Ghoul School.

One of the many unique things about Ghoul School was that its box didn’t just lay out the broad strokes of the game — it was something of a short story unto itself. While many games of the NES era were renowned for the complexity of the backstories offered in their instruction manuals, Ghoul School wanted prospective players to know what they were in for the second they picked it up, with a roughly 500-word synopsis outlining the complex series of events that comprise the game’s jumping-off point. To sum it up: You play Spike O’Hara, the resident mohawked punk kid at Cool School High (the game owes much of its tongue-in-cheek humor not only to ‘80s horror cinema but also, inexplicably, Rock ‘n Roll High School). After discovering an unusual skull in the local cemetery, Spike brings it to one of his teachers, in the process inadvertently opening a portal to Hell that unleashes hordes of the undead upon Cool School, transforming it into the titular Ghoul School by spreading their infernal influence. Students are gruesomely killed, teachers transformed into unholy abominations, and your dream girl — cheerleader Samantha Pompom — kidnapped by archdemon, King Cornea. Although a team of (ahem) “Spirit Ridders” are called in to save the day, they fail spectacularly; now it’s up to Spike and all the powers of his… uh… anti-authoritarian attitude to step up, save Samantha and close the portal.

Unlike many titles of this vintage, Ghoul School is a legitimately good game doomed by a variety of factors beyond its control. The brainchild of Scott Marshall — who, inspired by the idea of kids surreptitiously playing GameBoy in school, came up with the idea of a school-based horror game — it debuted on the cusp of the Super Nintendo era when NES games were falling out of vogue and more ambitious projects were either shifting to the 16-bit system or dying ignominious deaths as they attempted to stretch the capabilities of the fading console (see: StarTropics II). Ghoul School fell into the latter category: Gameplay unfolds in a fully realized high school complete with 200 demon-packed rooms to explore. Even more so than the house in Uninvited, players get the sense of this as an actual, lived-in place. In addition to classrooms, there’s a gym (complete with locker rooms), principal’s office, cafeteria, auto shop and every other amenity you would expect. It’s an ambitious conceit, and one that would have benefitted from better graphics and memory; even the title screen betrays the loftiness of the programmers’ goals, featuring a complex, pixelated recreation of an actual school with fully animated flag and lightning. As it was, Marshall and company found themselves severely limited. Forget the SNES — he had enough ideas to sustain a high-concept PS1 era title, including an in-game timer that would have triggered stampedes of undead students during “class changes,” fleeing the Grim Reaper when low on health, and a series of Maniac Mansion-style cause-and-effect puzzles including defeating dancing ghosts in the music room by destroying a metronome.

Regardless of what didn’t make it into the game, what did is still enjoyable and worthy of a revisit. Although many critical retrospectives tend to focus on the game’s clunky control scheme (which was taken wholesale from the aforementioned Zelda II), it’s legitimately fun, creepy, and above all, original and innovative. Like the best horror games, there’s an uncanniness at play that helps to enhance the brooding atmosphere. While the manual — which somehow packs in even more story than the back of the box — gives your opponents goofy names and silly descriptors like “Boo-toven” for the music teacher ghost, players who went into the game without the benefit of the instruction booklet (which, face it, was most of us) were met with a cast of anonymous, creepy ghouls and forbidding locations. That’s especially true of the many eyeball-themed monsters, which lend Ghoul School both a certain logical consistency and a unique flavor all its own. (Per Marshall, the emphasis on eyes was the result of a breakdown in communication between himself and programmers, who jettisoned his idea behind boss monsters each being undead body parts that would reform into a zombie-demon final boss). Indeed, I’d encourage anyone seeking out Ghoul School today to avoid the manual until after gameplay, as it lends the title a graver air and heightened state of spookiness; the threats will seem more random, purposeless, and as a result, more menacing if you are forced to fill in the details yourself.

Indeed, that atmosphere was probably one of the biggest nails in the title’s coffin. Forget clunky controls, too-complex mazes and graphical limitations; you had to get deep into actual gameplay to realize all that stuff. Everything about the setup for the game positively screamed at parents circa 1992 not to buy this for the tweens who were ostensibly its audience. The box art achieves its goal of trying to recreate an ‘80s-era horror poster too well, depicting an ominous school whose windows are filled with disembodied eyeballs, screaming mouths and grinning skulls. Combine that with the back cover and its insinuations towards death, and the opening moments of gameplay — in which you enter a classroom to some genuinely creepy music and bludgeon a reptilian ghoul to death with a baseball bat (what was it with NES horror games and kids with bats?) — and you can imagine the reaction most parents had. Gaming was still nominally viewed as a pre-collegiate interest, and Ghoul School sat at an unfortunate intersection. It was too difficult for the kids who were interested in playing it; meanwhile, their parents were too scandalized by the macabre setup and morbid content to buy it for them. Further compounding matters for those who fell in the middle of the Venn diagram — either adult gamers or people who didn’t have a problem with their children being exposed to darker material — was that Ghoul School suffered from poor advertising and marketing. It was published by Electro Brain, a company that only survived for eight years and only put out a limited number of middle-of-the-road titles. Deprived of the recognition and distribution model of a more prominent company like Bandai, Capcom, Jaleco or even Nintendo (who wouldn’t have touched this with a 50-foot pole anyway), it was doomed to obscurity from the start.

The gameplay of Ghoul School is far from flawless, and with its tendency for sprites to vanish, logistical difficulty, and occasional repetition, it falls on the cusp of the dreaded “Nintendo Hard” distinction. Once you adjust to the controls and gameplay, though, it’s an amazing ride into the realm of a singularly unique horror title, and a fun glimpse at the dawn of a new subgenre that would still take a few more years to find its legs. Definitely check it out if you can, and in the meantime, take a look at Marshall’s interview with Bogleech to read more about the stuff that didn’t make it into the game. He had some innovative ideas (including his conception of making Spike the first African American NES protagonist), and it would be great to get a Ghoul School: 2020 that fully implemented them for a survival horror title that would find a welcome place in the contemporary game market.